While great strides were made in establishing the political rights of African Americans following the American Civil War, the U.S. Supreme Court delivered several decisions, most notably in the case of Plessy v. Ferguson, that impeded civil rights efforts in the United States. 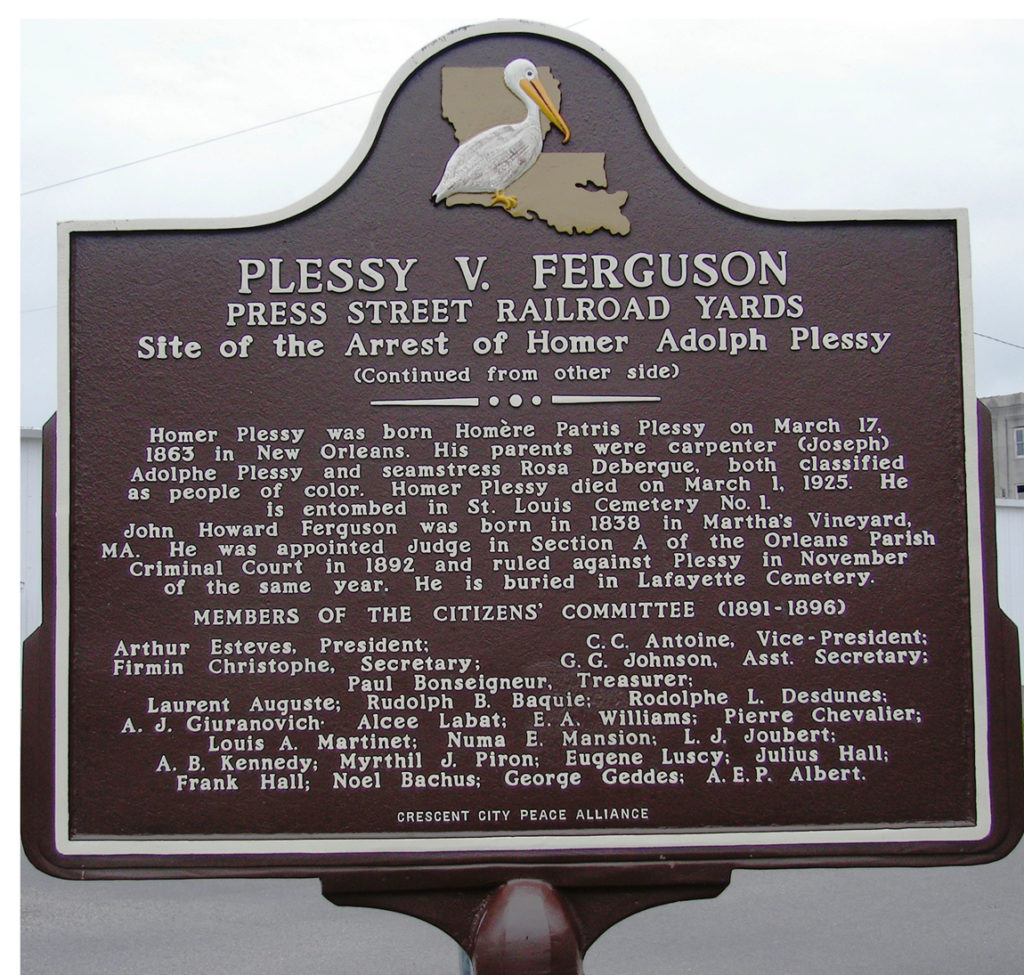 Beginning in 1887, following the passage of the first “Jim Crow” laws in Florida, states began to require that railroads furnish sepa­rate accommodations for each race. “Jim Crow” laws sought to restrict the rights of African Americans. They were named after a popular minstrel character in the 1830s. The laws were unfair, and by this time, segregation was extended to most public facilities. Many saw the extension of segrega­tion into railroads as a further objection of the work that Congress and the federal government had done to affirm the rights of African Americans.

On June 7, 1892, Homer Plessy, an African American from New Orleans, boarded a train and sat in a rail car for white pas­sengers. A conductor asked him to move, but Plessy refused, and was then arrested and charged with violating the Jim Crow Car Act of 1890. Plessy challenged his arrest in court and the case was tried in New Orleans. He argued that segregation violated both the Thirteenth and Fourteenth Amendments to the U.S. Constitution. Through appeal, the case was heard before the U.S. Supreme Court in 1896. By an eight to one decision, the Court ruled against Plessy, thus establish­ing the “separate but equal” rule. The “separate but equal” rule man­dated separate accommodations for blacks and whites on buses, trains, and in hotels, theaters, and schools.

In a powerful dissent, Justice John Marshall Harlan disagreed with the majority, stating “Our Constitution is color-blind, and neither knows nor tolerates classes among citizens.” Harlan’s words provided inspiration to many involved in the civil rights movement, including Thurgood Marshall, whose argu­ments in Brown v. Board of Education helped overturn the “separate but equal” precedent in 1954.

In respect of civil rights, common to all citizens, the Constitution of the United States does not, I think permit any public authority to know the race of those entitled to be protected in the enjoyment of such rights…. [I]n the view of the Constitution, in the eye of the law, there is in this country no superior, dominant, ruling class of citizens. There is no caste here. Our Constitution is color-blind and neither knows nor tolerates classes among citizens. In respect of civil rights, all citizens are equal before the law. The humblest is the peer of the most powerful. The law regards man as man and takes no account of his surroundings or of his color when his civil rights as guaranteed by the supreme law of the land are involved….